It's always sobering to see what happens when generalities are put to the test. Jans showed that yeah, B-Trees are needed for databases, but it's not nearly as simple as it looks; you can't just implement a B-Tree and say, "Now I've got a database!"
-- Geoff Wozniak (and more)

Hannes and Andreas's talk on Dylan macros for destructuring and manipulating binary data was good (too much code-reading for my tastes, though). The system they built (Network Night Vision) looks pretty damn awesome (if you are interested in what you can do with Dylan and DWIM user interfaces, it is also very much worth looking at). Speaking of user interfaces, Peter Herth's talk on LTk had some really neat demos.
-- Vladimir Sedach

It looks as if we need to beef up the SBCL marketing department, though. I had several discussions of the form "Q: What would it take to make SBCL do FOO? A: It's already done that for the latest X releases.". In the worst case with the same person asking for three different features in succession, all of which had been implemented :-)
-- Juho Snellman

Was impressed that not once in his talk did Andrew Borden utter the word "Lisp" or anything related to it.
-- Andreas Fuchs (and more)

Michael Sperber gave an enticing report from the Scheme R6RS process. He confirmed that standardisation is a very hard and painful process (he claimed it to be the most painful thing he has done since the breakup with his first girlfriend), a quite apropos comment to the ongoing debate on comp.lang.lisp.
-- Christian Lynbech (and more)

The setting and the weather was unfeasibly beautiful. (I found/find it interesting that a not insignificant number of people were compelled to invoke Harry Potter in response.)
-- John Q. Splittist

I am very happy that ILC'07 turned out to be so successful. This hasn't been always clear during the preparations, so I guess all the organizers breathed a sigh of relief when the numbers of registrations started to increase (and we suddenly had to come up with ideas how to manage a situation in which we nearly had too many registrations ;).
-- Pascal Costanza

[T]here's a fraction within the Lisp community that is completely detached from what is going on nowadays. They did very cool things in the past, but then they somehow lost interest or they think that everything that came afterwards can't compare anyway so they don't need to bother. (And don't get me wrong - I'm not saying that the new stuff is always better than what's already there, not at all. It's just that you shouldn't pretend to know everything on Earth if you don't.)
-- Edi Weitz 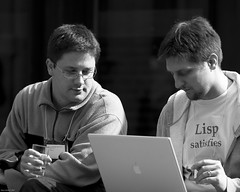 Welcome to Planet Joe Marshall. I can't get enough of his new website. Today's featured link ties in to some modern history, though.

From the Bits and Pieces page:

When I started using closures I became the major source of runtime garbage at LMI. Most users simply turned of the garbage collector, wrote code that avoided consing, and rebooted once the machine ran out of memory. I thought that the machine should be taking care of the garbage rather than me, so I got nominated to get the GC working.

Of course, in this modern era, rebooting the system has been replaced by the OOM killer.