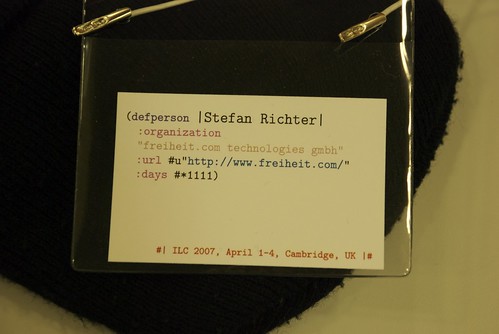 Stefan Richter has added a lot of photos to the ILC07 flickr pool. They're mostly of activities at the conference and the attendees.

Joe Marshall has been busy adding material to his new website. The latest bit: Gigamos notes. I'd never heard of Gigamos before, but I was surprised to learn that the successor (sort of) to LMI was involved in a Canadian bribery scandal!

He's also adding new files to his Google svn repo. I fetched it like this:

Each daily svn update pulls in new, interesting stuff. For example, the repo now has fleabit:

Fleabit is the Common Lisp compiler for the K machine a Lisp optimized RISC machine developed at Lisp Machine Inc. and GigaMOS Systems. Fleabit is largely an adaptation of ORBIT the Scheme compiler developed at Yale in the T project. Like ORBIT it is based upon ideas developed by Steele in the Rabbit compiler for Scheme.